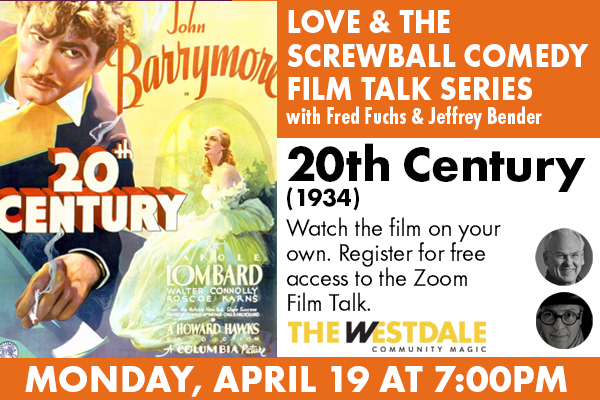 A flamboyant Broadway impresario who has fallen on hard times tries to get his former lover, now a Hollywood diva, to return and resurrect his failing career.

Howard Hawks’ rapid-fire farce Twentieth Century (1934), a comic collision of tempestuous personalities in the rarified world of Broadway, is the proto-screwball comedy. It’s a genre born of the depression where the airs of the rich and sophisticated were deflated through madcap behavior and zany antics, all pitched at a breakneck pace. The elements of screwball had been kicking around the early sound era in the rat-a-tat pacing of the streetwise Warner Bros. pictures, the lampoons of the decadent rich in such films as Frank Capra’s Platinum Blonde (1931), and the show-biz pictures like Morning Glory (1933) and What Price Hollywood? (1932), but it took Howard Hawks to combine them in this screen adaptation of the Broadway farce. Hawks was a director more known for his male-centric action movies than zany comedies; his early thirties hits include the war picture The Dawn Patrol (1930), the prison drama The Criminal Code (1931), the race track thriller The Crowd Roars (1932) and the original Scarface (1932), the quintessential gangster film of the era. Twentieth Century was his first comedy of the sound era, but his mix of frantic pacing, whiplash shifts in tone and devil-may-care direction of glamorous stars in wacky parts launched the defining comedy genre of the thirties.