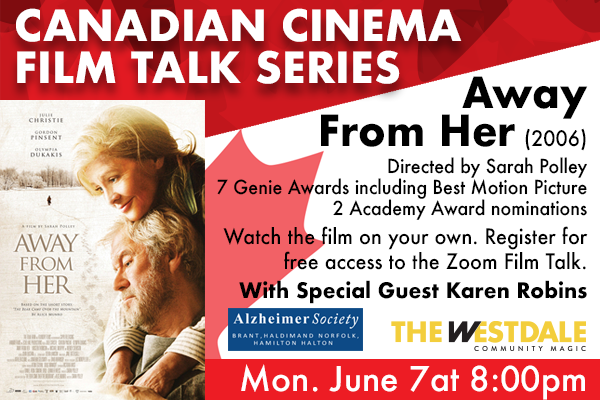 AWAY FROM HER (2006) Canadian Cinema Film Talk Series

Based on Alice Munro’s short story “The Bear Came Over the Mountain”, the feature directorial debut of Polley, from the 2001 collection Hateship, Friendship, Courtship, Loveship, Marriage.

Married for almost 50 years, Grant (Gordon Pinsent) and Fiona’s (Julie Christie) serenity is interrupted by Fiona’s increasingly frequent memory lapses. When it is no longer possible for either of them to ignore the fact that she is being consumed by Alzheimer’s, the limits of love and loyalty are wrenchingly redefined.

Watch AWAY FROM HER on CBC Gem Rent, Stream, or Buy AWAY FROM HER Register for the Zoom Film Talk June 7 at 8:00 pm
+ Google Calendar+ Add to iCalendar