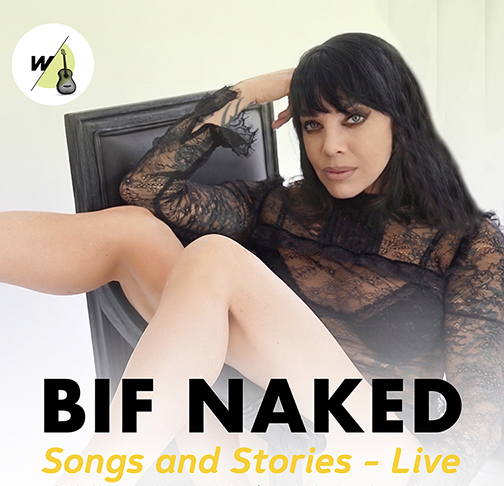 Bif Naked has pushed the boundaries of acceptability since day one. Her screaming loud creative has never been muzzled as she has unleashed a continual and seemingly endless string of blazing live performances, recordings, videos, quotes, sound-bites, spoken word and visuals that have established Bif Naked as one of the most acclaimed and interesting performers to grace the rock stage.

Bif Naked will be at The Westdale to perform her favorite songs and poetry, read select stories from her book (and share many secrets that may not have made it to print) and enjoy some sharing with questions and answers, as always. She will have books for signing, and lots of surprises!

At 18 years of age, she relocated to Toronto and co-founded alt duo “KINK”. They rapidly gained a cult following, performing with Vans Warped Tour and creating a foundation called “Guitars for Girls”, which donates gently used guitars to girls in need and empowers them to pursue their musical dreams.

In 2016, Favvkes became a solo artist – this was the moment Favvkes was truly born as a performing artist in control of her stage element and her destiny. Currently, Favvkes is in the studio, teamed up with platinum-awarded producer Thomas McKay. Their first track “Black Dove” confronts pain and hardship and channels it into love. Favvkes wrote the song intending it to be an empowering anthem of inner strength.

Bif Naked and Peter Karroll from Her Royal Majesty’s Management have approached Favvkes for their management roster, calling her the voice that music has been missing.