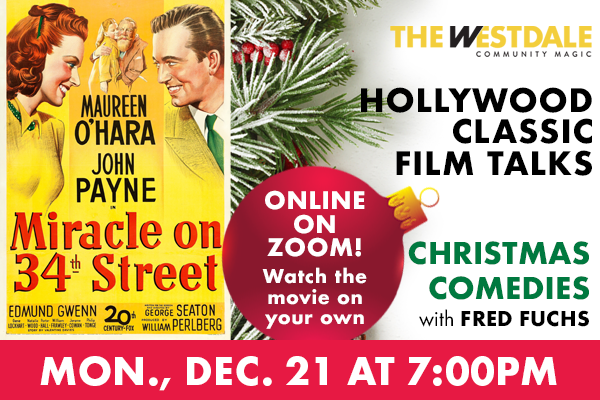 Watch ‘Miracle on 34th Street’ on your own at home, and then join us on Zoom where Hollywood producer Fred Fuchs will delve into the artists who made the film, their craft, and what goes into the filmmaking process. Fred will take you behind the scenes to share the personalities and what life was like during the Golden Age of Hollywood! There will be a question and answer session after each talk.

(1947) In this Christmas classic, an old man going by the name of Kris Kringle (Edmund Gwenn) fills in for an intoxicated Santa in Macy’s annual Thanksgiving Day parade. Kringle proves to be such a hit that he is soon appearing regularly at the chain’s main store in midtown Manhattan. When Kringle surprises customers and employees alike by claiming that he really is Santa Claus, it leads to a court case to determine his mental health and, more importantly, his authenticity.