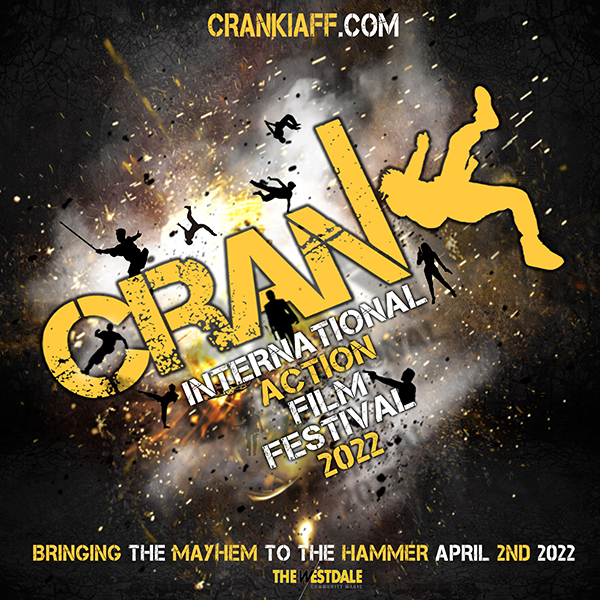 CRANK INTERNATIONAL ACTION FILM FESTIVAL is a unique experience that gives action and the makers of action, on and off the screen, a place to showcase their talent.

The first year of the festival will be a single-day event that will focus on bringing people from the action community to one place and letting them know that CRANK shares their vision of filmmaking and ass-kicking on screen.

We will be showcasing short ACTION films from around the world while giving appreciation and acknowledgment to the stunt community.

At CRANKIAFF, we want to celebrate our love for action films and the people who make them happen.

The stunts, the fights, the car chases, and other numerous on-screen spectacles!

It is our vision to make CRANK the place that will bring the community of action makers together where they can truly express their on-screen mayhem.

Surprise Robbery In broad daylight, in downtown, a man steals another’s briefcase, starting a chase. In the nearby streets, another guy is riding a bicycle. The fate of these three men will cross, changing their lives forever.

Poachers Returning to her childhood home for the first time in 15 years, Kat finds herself caught in the middle of South Africa’s brutal ivory poaching crisis. Once ill-equipped and shambolic, the ivory poachers are now well funded, heavily-armed, and cunning. The local rangers are losing badly. Kat is forced to make a decision, run away or stay and help.

“Overcover” is an action-comedy following two undercover cops during an operation that doesn’t quite go as planned…because SOMEONE overacted their role.  Trailer

One In The Chamber Hanna unknowingly wakes up in an abandoned building swarmed with (mercenaries) She must survive her way out to escape. Failure is not an option, Failure is death!  Trailer

Survivors When the unexpected side effect of a trial cancer treatment brings about the apocalypse, a group of young friends must use their martial arts skills to survive the infected hordes.  Trailer

Fists Of Absinth A Samurai-obsessed American visits Tokyo for the first time, where he drinks Absinthe, time-slims back to ancient Japan, and has to defend his new sneakers against Samurai and Ninja  Trailer