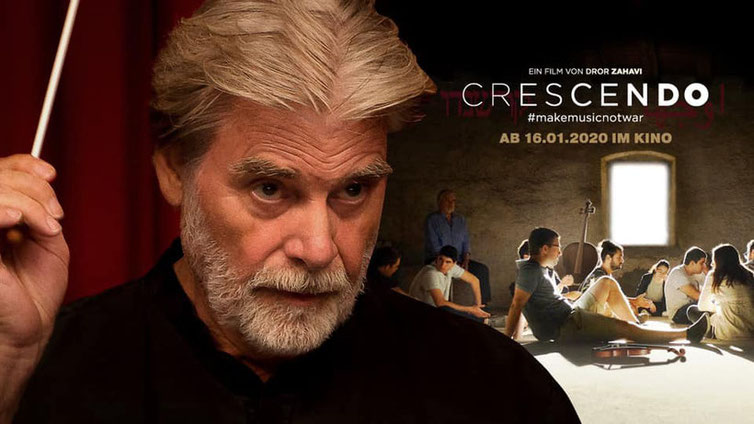 FREE WITH TICKET: May 3 at 7PM EST – Q&A with Stephen Glantz, Screen Writer of Crescendo, With Moderator Benjamin Wright, Film and Media Scholar (Recording available for viewing after the fact)

When a world-famous German conductor, Eduard Sporck, accepts a commission to create an Israeli-Palestinian youth orchestra, he is quickly drawn into a tempest of unsolvable problems, exacerbated by the passion of his adolescent musicians. Auditioned in Tel Aviv, the youth orchestra then travels under tight security to practice and perform in beautiful tri-lingual mountains of South Tyrol. Having grown up in a state of war — constant risk of terrorist attacks for the Israelis and constant occupation for the Palestinians, — both sides are far from able to form a unified team. In early scenes in the film on the Palestinian side, we see talented Layla’s difficulties studying and practicing her violin surrounded by violence, and the humiliations of crossing the border into Israel. We can better understand why, lining up behind the two best violinists, the emancipated Palestinian Layla and the charismatic Israeli Ron, the youth form two opposing sides who deeply mistrust each other, on and off-stage alike. For Maestro Sporck, with only three weeks of rehearsal, his essential task becomes more interpersonal than musical: can the children of conflict come together in harmony? (This story is fictional, yet there are several actual precedents for orchestras comprised of both Israelis and Palestinians.) Adding complexity to this narrative, Maestro Sporck is trying to overcome his own dark family past as the son of a Nazi mass murderer. A key scene has Sporck discuss his family background with his orchestra. There are other narrative complications to make this movie even more complex, including an interfaith young love squelched by parents and attempts by political extremists to sabotage the whole project. Since the young musicians were not professional actors, much of the emotion on screen was genuine, and the film’s director concluded that though he doubts that any continuing friendships were formed, “They will carry the fact that Palestinians and Jews were, for something like seven or eight weeks, living together. Maybe they will know it is possible to live together, if you have an aim, if you just ignore the difficulties.”