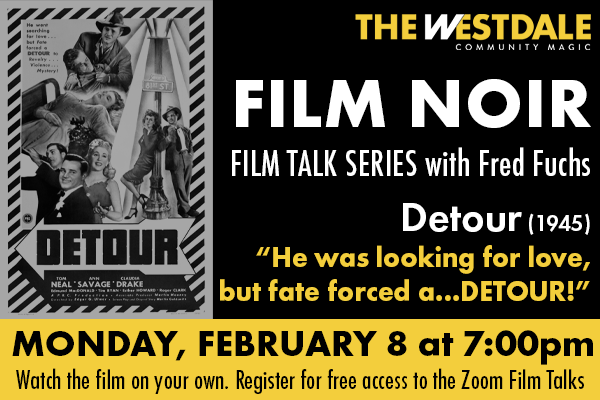 “He was looking for love, but fate forced a…DETOUR!”

If you’ve ever wondered if hitchhiking is safe, don’t look any further than the story of a ‘down-on-his-luck’ jazz pianist (Tom Neal) who is trying to find a way to get from New York City to the arms of his fiancé in Los Angeles.

Along the way, he encounters one of the most vicious femme fatales in all of Film Noir, played by Ann Savage who has other plans that include blackmail and bad manners!

You will not want to miss Edgar G. Ulmer’s Poverty Row picture from 1945 and then join Fred Fuchs as he leads an informative talk about why this movie is part of the Film Noir canon.