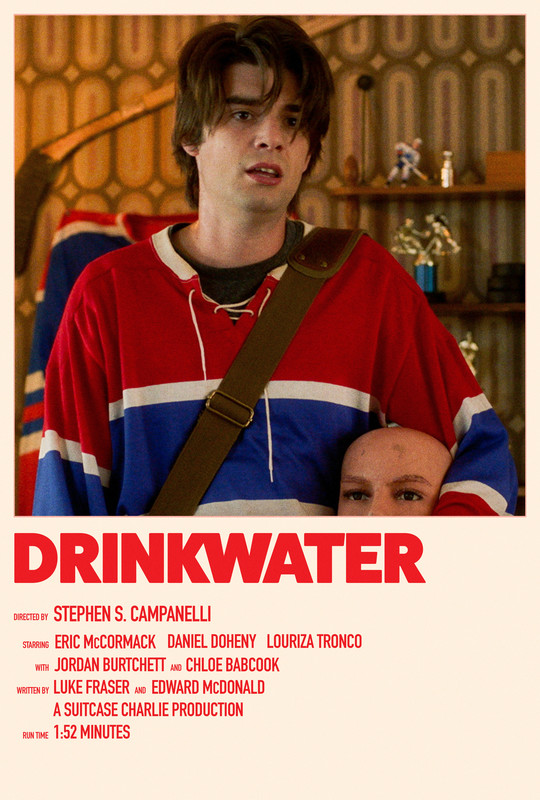 Drinkwater is a quirky homage to 80’s teen coming-of-age films about friendship, parental mishaps, and trying your best to survive high school. In small-town British Columbia, Canada, awkward teen Mike Drinkwater has trouble fitting in. Hank, his offbeat father, spends more time living in his own delusional world than paying attention to his son. Mike’s lack of direction takes a turn when he meets Wallace, a new girl from the US. Over the course of Mike’s final semester, Wallace helps Mike train for an annual cross-country race, while Mike guides Wallace through an unfamiliar, Canadian experience. The film is filled with a balance of humour and emotional moments that mirror our main characters’ friendship. Drinkwater is a love letter to small-town life and quirky family moments that have resonated with audiences for decades. Although the film is set in 2020, it harks back to simpler times and captures the nostalgia of 80’s small-town Canada. Eric McCormack, Daniel Doheny and Lourza Tronco

Stephen Campanelli, was the first to combine “A” Camera operating and steadicam, and in doing so unlocked an entirely new filmmaking perspective that quickly peaked the interests of some of Hollywood’s top directors, including Stephen’s boyhood idol, Clint Eastwood. Stephen first joined Clint on the Oscar nominated BRIDGES OF MADISON COUNTY and has remained Clint’s most trusted “camera eye” ever since, including Oscar-winning films, MILLION DOLLAR BABY and MYSTIC RIVER, and the Oscar-nominated LETTERS FROM IWO JIMA, GRAN TORINO, AMERICAN SNIPER, THE MULE, and RICHARD JEWELL. Stephen’s talent has been recognized by winning several prestigious awards throughout his career, including an SOC Lifetime Achievement Award, and has witnessed six Oscar-winning performances with Clint, and also on THREE BILLBOARDS OUTSIDE EBBING, MISSOURI. Stephen is following in the footsteps of a great storytelling director, who has shared with him his vast knowledge, and now with Clint Eastwood’s blessing and the admiration of every cast and crew he has worked with, Stephen Campanelli has made the natural leap to the director’s chair, having already helmed 4 feature films: DRINKWATER, MOMENTUM, GRAND ISLE, and the #1 box office Canadian film, INDIAN HORSE, which went on to win over 15 international film festival awards. Stephen has also directed a pilot for Fox, PARADISE INC., and a nationwide Nissan Titan Commercial, and is now ready to breathe life into his next project.