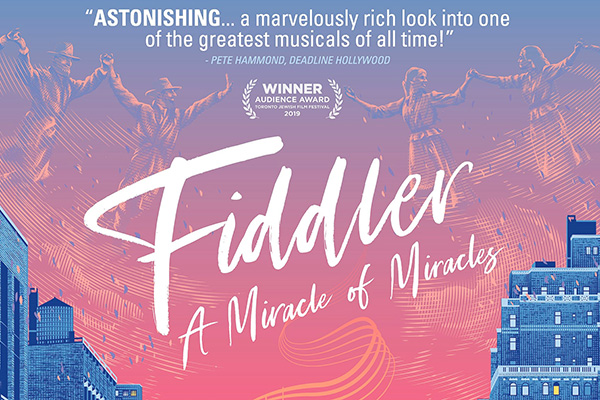 FREE WITH TICKET: May 3 at 7 PM EST – Q&A with Max Lewkowicz, director of Fiddler: Miracle of Miracles, and Fred Fuchs, television and film producer (Recording available for viewing after the fact)

We wanted a film for the opening night of our virtual Jewish Film Festival, that both embodied the purpose of this Festival and was thoroughly entertaining and enjoyable. We found it in this movie. If you think you already know all you need to know about this theatrical phenomenon, you will be surprised to discover so much more about how this old Yiddish story turned into a play and film that has captivated the whole world. The shtetl of Anatevka has come to stand in for every homeland left behind, and Tevye the milkman for every father of a restless new generation of children. The 1964 Broadway musical that became a theatrical phenomenon is now the subject of this joyous documentary, revealing its creative origins in Sholom Aleichem’s poignant and funny turn-of-the-century tales of Russian Jewish life and their long-lasting international cultural impact. This is the show that not only held the record for 10 years as the longest-running musical on Broadway but also became the very definition of the Eastern European Jewish experience. Touching audiences with humour and heart, the show’s tale of the loss of tradition cuts across barriers of race, class, nationality and religion. With rare archival materials, performance footage, interviews and clips from the Oscar-winning 1971 film adaptation, filmmaker Max Lewkowicz chronicled the show’s history from its early Yiddish origins to today’s enduring human themes that inspire international theatregoers across the generations. As the film makes clear, Fiddler on the Roof was the product of a very specific team of Jewish American musical theater artists. Composer Jerry Bock and lyricist Sheldon Harnick teamed up with book writer Joe Stein and the brilliant director/choreographer Jerome Robbins to breathe contemporary theatrical energy into the Yiddish classic. It seemed an odd idea: who wants to see a musical about a Russian milkman marrying off his daughters before a pogrom? It turned out — everyone! In this absorbing documentary, interviews with musical luminaries illuminate one of Broadway’s longest-running, award-winning musicals. Stephen Sondheim, Hal Prince, Jerry Bock, Itzhak Perlman, Lin-Manuel Miranda and Joel Grey all appear in the film to round out the fascinating story of how universal this distinctly Jewish musical has become and how influential it is still today. As Tevye would say, “L’chayim – to life!”