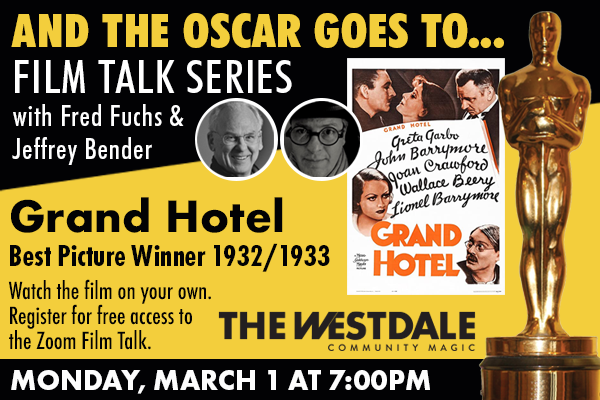 The classic ensemble picture about a diverse group of guests at a posh Berlin hotel who struggle through scandal and heartache. Directed by Edmund Goulding and starring Oscar-honoree Greta Garbo (“Ninotchka,” “Queen Christina”), Oscar-winner Joan Crawford (“Mildred Pierce”), John Barrymore (“Romeo and Juliet”), and Oscar-winner Lionel Barrymore (“It’s A Wonderful Life”). Recently selected by the prestigious American Film Institute as one of the greatest American films of all time.

To date, it is the only film to have won the Academy Award for Best Picture without being nominated in any other category.

Watch GRAND HOTEL (1932) on your own and then join Fred Fuchs and Jeffrey Bender to delve into the production, artists, and story of the film