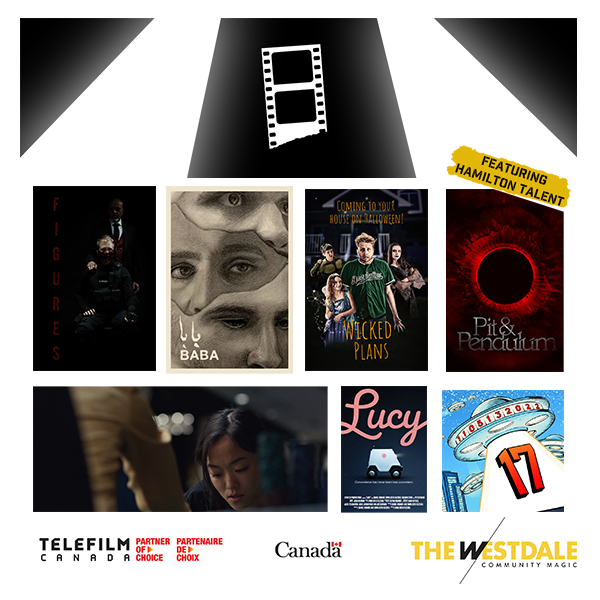 Lucy, 13m, USA, Dir. Emma Sofia Fazzuoli, Wr.Daniel Robaire / Emma Sofia Fazzuoli
When Brad orders takeout after his Grindr hookup, he gets more than he bargained for when Lucy, a food delivery robot, drops off a baby instead. Paranoid, he drags his roommate into the situation when their nosy neighbor arrives bringing more complications.

Wicked Plans, 5m, Canada, Lee Chambers
Style Dayne, the Pizza Guy from Deadpool stars as a foreign extremist from Amadajiya, who accidentally chooses Halloween to enact a moment of terror. To his surprise, he discovers that North American life and culture is truly special, unique and sweet.

Figures, 20m, Canada, Jamie Hegland, Jad Yurich
A Special Forces officer turned crime syndicate operative uncovers the site of a drop being conducted by one of the world’s most dangerous, underground criminal organizations. With his syndicate’s mission of eradicating this rival organization, he infiltrates the drop site in an attempt to recover a mysterious item and locate the group’s notorious leader. However, things go astray when he is unexpectedly forced to deal with one of their organization’s most reputable mercenaries. Under unforeseen circumstances, he must use his newly acquired skills and act quickly in order to accomplish his mission and survive this encounter.

Surrender, 15m, USA, Jess Dang
A recovering compulsive gambler responds to her past trauma after 100 days of abstinence.

Pit & Pendulum, 27m, Canada, J. Aldric Gaudet
“Pit & Pendulum” is a 27 minute experimental film based upon Edgar Allan Poe’s horror classic. It is the terrorizing story of a person sentenced to death who becomes the plaything of their jailers. They are sent walking through a dark room in hopes they will fall into a pit. When that doesn’t happen they are tied down on a table to watch the painfully slow descent of a swinging pendulum with a sharp-edged blade aimed at their stomach. Escaping from the blade did not mean freedom. The walls of the dungeon grow blistering hot first, then squeeze together to push them to the brink of the pit, before being saved at the very last second.