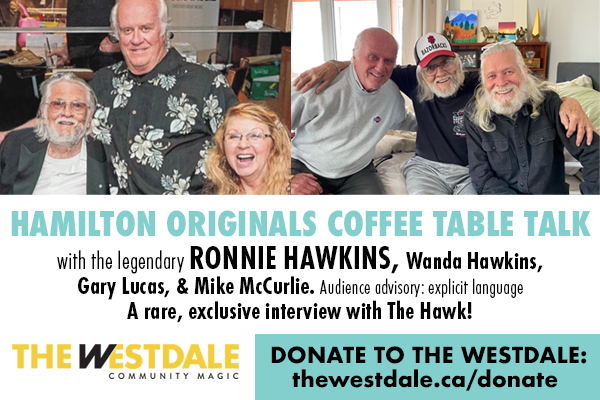 As you know, Ronnie Hawkins couldn’t make our Hamilton Originals show as scheduled November 2; however, he did call the next day and insisted we go visit him again in Peterborough for an audio interview! He hasn’t done for one a while and made it clear he won’t be doing any more in the future. So off we drove to the Hawkins family home on the banks of the Trent Canal near Peterborough on a sunny Friday morning.

Folks, from the moment we arrived, this was to be no normal (or formal) interview. No, for a few hours, we just sat around the coffee table, four friends lazily gabbing about old times: Wanda Hawkins, Ronnie’s wife of some 60 years; Gary Lucas, Ronnie’s long time friend of almost that long, and yours truly.

Ronnie and Wanda recount tale after tale of performing and partying with Levon & Robbie, Ricky, Garth and Richard, not to mention John and Yoko, Gordon Lightfoot, Kris Kristofferson, and Bill Clinton. If you’re into music legends, this is nothing but killer name-dropping all the way through… it’s sex, drugs, and rock, all rolled into one crazy convo.

Word up: this gab session is not for the faint of heart: language advisory in effect!

Note too there’s no video of the actual interview. At 85, Ronnie prefers y’all see pictures of the glory years, so that’s what you’re gonna get (again, with a few more adjectives), cuz The Hawk tells you straight. Don’t say I didn’t warn you.

We will launch the video on YouTube and Facebook on Monday, December 14 at 8:00 pm.  The interview will be available to watch at your leisure.