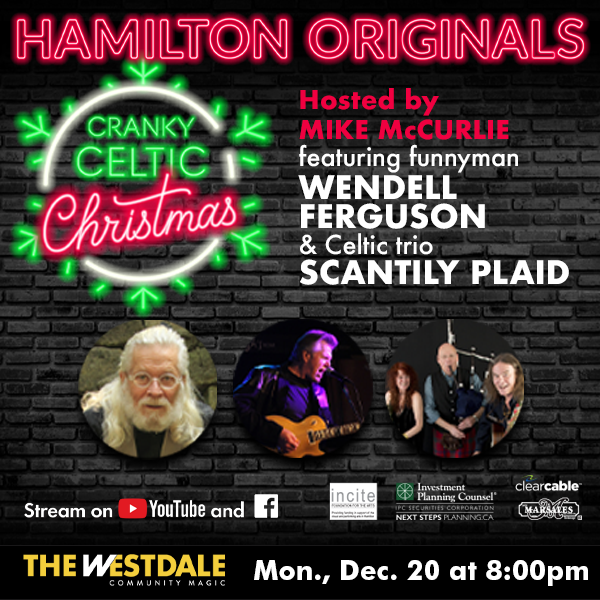 Hamilton Originals is getting in the spirit – the Cranky Celtic Christmas spirit!

Have some good, old-fashioned, laughs and share some Celtic Christmas tunes with Mike, Wendell, and Scantily Plaid.  It’s a Christmas show like you have never seen before!

Wendell Ferguson is a buffoon, a fool, a charlatan and a general nuisance…but he can play the guitar (a bit). He’s garnered 9 CCMA Awards, an OCPFA Lifetime Musician Award and was twice nominated for a JUNO. His CD, “Wendell Live! The Shit Hits the Fans!” was nominated for “Album of the Year” at the 2006 CCMA Awards. His CD, “Menage A Moi” won the ‘Instrumental Album of the Year’ at the 2010 Canadian Folk Music Awards. AND he was inducted into the Canadian Country Music Hall of Fame. Despite all this he still remains the same unapproachable snob he’s always been.

Scantily Plaid is a unique brew of Canadian Celtic Roots that Rock! They put an original spin on traditional music, while adding a traditional spin on their original music. The intricate Celtic harp playing with the scintillating vocals of Ruth Sutherland, the robust vocals and myriad of other instruments (drums, guitar, harmonica, and boots!) played to perfection by Doug Feaver, and the authentic and inspiring piping style of Allan Eaton all add to create this varied and magical music. Scantily Plaid has been playing music festivals, highland games, Celtic festivals, concerts and clubs for 20 years with their travels taking them across Canada and the United States, and across the seas in Great Britain, France, and Uruguay. Along with their 3 critically acclaimed, award winning CDs (all of which have been termed “Celtic Classics”), Scantily Plaid’s poignant and spirited live shows have received standing ovations wherever they have played.

Proof of COVID-19 vaccination is required for entry.  The Westdale is operating at 100% capacity and all available seats are for sale for Hamilton Originals.  The requirement for individuals to maintain two metres of physical distancing is removed.