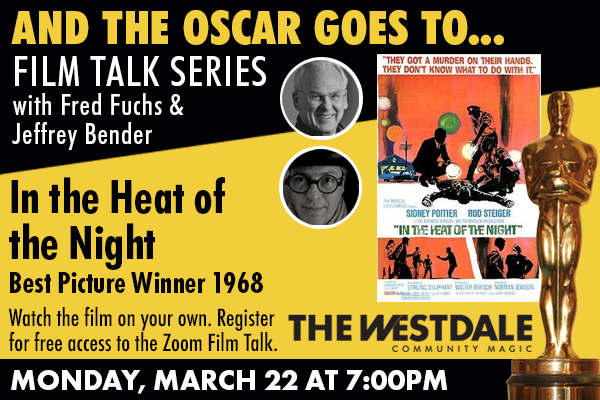 Sidney Poitier, in one of his most celebrated roles, appears as Virgil Tibbs, a Philadelphia homicide detective who, while visiting a small Mississippi town, will find himself falsely arrested for the murder and then, in a strained collaboration with the town’s sheriff (Rod Steiger), stays on to help solve the murder. Steiger’s town is a backward “redneck” Southern burg whose population includes an aristocratic racist, the eccentric owner of a fly-infested diner, exceptionally stupid cops, young thugs who beat people up for the fun of it, and a young woman who provocatively cools herself by standing nude at her window. When the murder is finally solved Poitier and Steiger will part with reserve and distance, but with enormous respect for each other. Norman Jewison directed.

Watch IN THE HEAT OF THE NIGHT (1967) on your own and then join Fred Fuchs and Jeffrey Bender to delve into the production, artists, and story of the film.