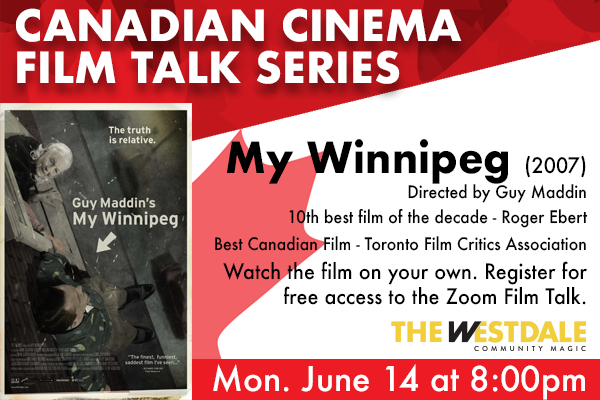 With MY WINNIPEG, iconoclastic filmmaker Guy Maddin continues in the freewheeling, genre-bending tradition that has made him one of Canada’s most consistently intriguing and internationally respected artists. MY WINNIPEG is a documentary (or docu-fantasia, as he describes it) about his hometown. Equal parts mystical rumination and personal history, city chronicle and deranged post-Freudian proletarian fantasy, MY WINNIPEG – which is framed as a goodbye letter – blends local myth with childhood trauma. A deliriously layered provocation, MY WINNIPEG is outrageous, informative and wildly entertaining.

Watch MY WINNIPEG on Kanopy Register for the Zoom Film Talk June 14 at 8:00 pm
+ Google Calendar+ Add to iCalendar