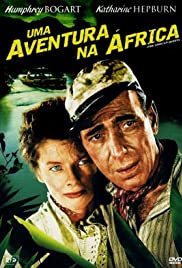 Join film producer, and chair of The Westdale Cinema Group, Fred Fuchs for a Film Talk after the Sunday, September 6 at 7:00 pm screening of The African Queen.  Fred will share his insight as a Hollywood film producer and answer your questions about the film.  The film talk is included in the price of admission

The Thursday, September 10 screening is mask mandatory. The concession stand will be closed and there will be no food and drink, so masks must stay on during your entire visit.

September 1914, news reaches the colony German Eastern Africa that Germany is at war, so Reverend Samuel Sayer became a hostile foreigner. German imperial troops burn down his mission; he is beaten and dies of fever. His well-educated, snobbish sister Rose Sayer buries him and leaves by the only available transport, the dilapidated river steamboat ‘African Queen’ of grumpy Charlie Allnut. As if a long difficult journey without any comfort weren’t bad enough for such odd companions, she is determined to find a way to do their bit for the British war effort (and avenge her brother) and aims high, as God is obviously on their side: construct their own equipment, a torpedo and the converted steamboat, to take out a huge German warship, the Louisa, which is hard to find on the giant lake and first of all to reach, in fact as daunting an expedition as anyone attempted since the late adventurous explorer John Speakes, but she presses till Charlie accepts to steam up the Ulana, about to brave a German fort, raging rapids, very bloodthirsty parasites and the endlessly branching stream which seems to go nowhere but impenetrable swamps… Despite fierce rows and moral antagonism between a bossy devout abstentionist and a free-spirited libertine drunk loner, the two grow closer to each-other as their quest drags on..