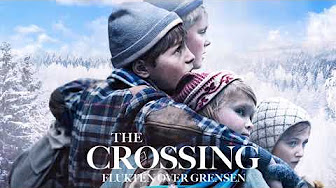 Every film festival wants to end with a movie that people will enjoy deeply and will remember well, and this year we found it at the last moment in the first Norwegian film it has been our pleasure to screen. THE CROSSING is full of action, courage and friendship, unfolding during the German occupation of Norway in 1942. While it does portray the danger for Norwegian Jews hunted by Nazis, it is an escape movie that takes place in the beautiful Norwegian countryside near the Swedish border, and avoids the visual horrors of the holocaust. It centers on the rescuers, two rural children whose parents are in the Norwegian resistance movement, and on their family relationship with each other as they undertake the task of rescuing the two Jewish children their parents have hidden. It is the story of adventurous 10-year-old Gerda, who wears a cape and wooden sword and imagines herself as a storybook musketeer, and her serious 13-year old brother Otto. One day, just before Christmas in 1942, Gerda and Otto’s parents are arrested, leaving the siblings on their own. Following the arrest, and searching their house from cryptic clues from their parents, they discover two Jewish children, Sarah and Daniel, hidden in a secret cupboard in their basement. It is now up to Gerda and reluctant Otto to honour their parents’ wishes and to help Sarah and Daniel escape Nazi border troops and to cross into neutral Sweden where they can reunite with their parents. Along the way, they meet those who would help and those who would betray them. Johanne Helgeland, the film’s director, is both a teacher and a filmmaker, and wanted to make a classic film with a serious tone exploring courage and friendship. It’s a thriller for adults that takes children seriously, and thus works with young adults as well. “A film with a harsher, rawer form of realism would have been too much. But I didn’t want to water the subject down either. We had to find a balance,” she explained. THE CROSSING is a film about the confidence, uncompromising loyalty and great courage you can find in children, and finds the proper balance to conclude the 2021 Windsor/Hamilton Jewish Film Festival.