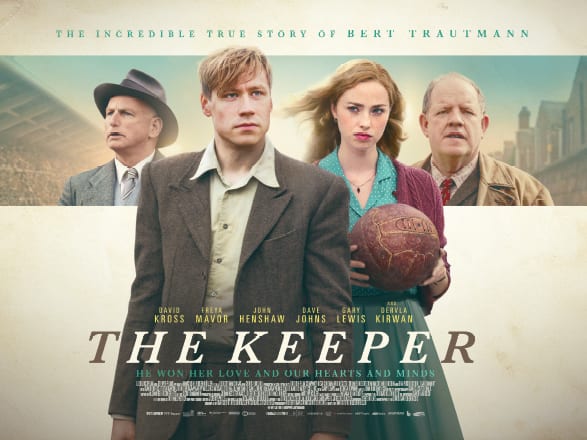 We Canadians don’t know much about international soccer – football to the rest of the world—so we didn’t even know that the “keeper” of the title referred to the goalkeeper on a football team. And we had never heard of Bert Trautmann, the star keeper of the Manchester City Football Club in the 1950s. But after previewing this film, we were unanimous in making this life-affirming drama part of the 2020 Festival. (It is so real that we are using English sub-titles to help us with some of the local Manchester accent.) This biographical drama tells the remarkable life story of Bert Trautmann, a veteran German paratrooper, English prisoner of war, and then brilliant footballer who tested his adopted country’s willingness to forgive its enemies. The film opens in the late days of the war as Trautmann, a paratrooper for the Third Reich, is captured and transported to an English POW camp. There, he begins to re-examine his beliefs and allegiances as he watches films of recently freed concentration camp survivors. When he is put to work in a nearby town, he reluctantly plays goalkeeper with the locals and displays his athletic brilliance. At the war’s end, he is hired by the Manchester City Football Club and falls in love with the coach’s daughter. But this is a true story, so just when the movie might become a predictable romance, it takes several shocking turns. In an England still suffering the trauma of six years of war, Trautmann’s signing causes outrage among thousands of Manchester fans, many of them Jewish. But support comes from an unexpected source: Holocaust survivor Rabbi Alexander Altmann, a Manchester football fan who fled the Nazis to England and later Professor at Brandeis University. The city learned to accept “The Kraut” who played more than 500 times for the club, including the Cup final of 1956 where he dislocated five vertebrae in his neck saving a goal. Ultimately, the film does not shy away from the complicated nature of Trautmann’s story. On the contrary, as a central part of its appeal, it raises tough questions about forgiveness, forgetting and the power of sports to unite.