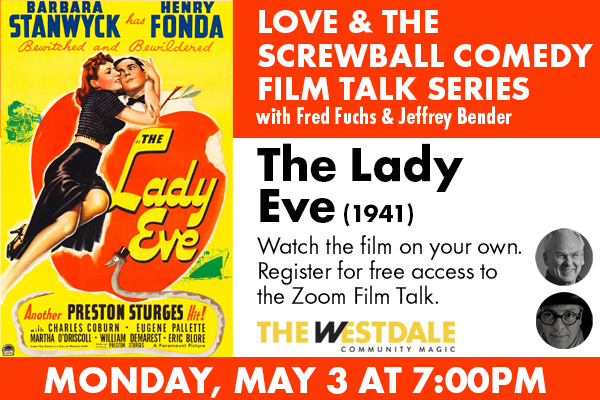 A lady cardsharp tries to con an eccentric scientist only to fall for him.

Let loose to direct his own screenplays with The Great McGinty in 1940 (he sold his script for $1 on condition he sit in the director’s chair himself), Preston Sturges proceeded to skip through seven peerless comedies in five years before his energy finally began to wane. The third of these, The Lady Eve, is a pure-gold gold-digging farce in which Barbara Stanwyck’s beautiful con artist Jean Harrington and her similarly unscrupulous ‘colonel’ father (Charles Coburn) set out to fleece explorer, snake expert and heir to the Pike Ale fortune Charles Pike (Henry Fonda) on an ocean cruise.  Critic Roger Ebert later said: “If I were asked to name the single scene in all of romantic comedy that was sexiest and funniest at the same time, I would advise beginning at six seconds past the 20-minute mark in Preston Sturges’ The Lady Eve.”

Register for the Zoom Film Talk May 3 at 7:00 pm
+ Google Calendar+ iCal Export