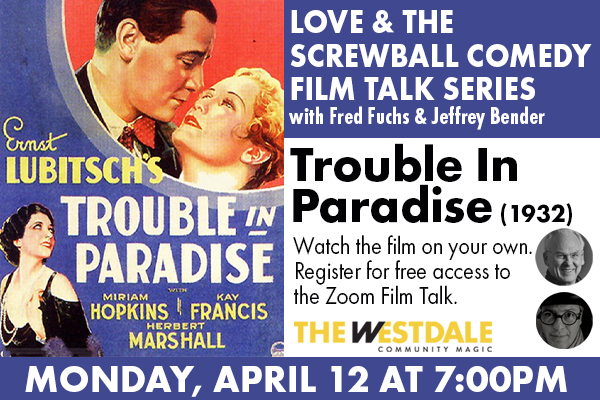 A gentleman thief and a lady pickpocket join forces to con a beautiful perfume company owner. Romantic entanglements and jealousies confuse the scheme.

One of the pure gems of 1930s cinema, Trouble in Paradise (1932) was described around the time of its release as being “like caviar, only tastier.” Although Ernst Lubitsch’s earlier musicals with Maurice Chevalier and Jeanette MacDonald displayed a characteristic continental flair and sophistication, Trouble in Paradise was really what started people talking about “the Lubitsch touch.” For many film critics and movie historians, this meant a combination of things; the director’s distinctive style which, in the case of comedies and farces, treated even the most scandalous manners and behavior in a light, humorous manner; his pushing the limits of what was deemed sexually risqué for the period; Lubitsch’s sparkling, sometimes cynical wit, and his cinematic fluency.

Where to watch TROUBLE IN PARADISE for FREE Register for the Zoom Film Talk April 12 at 7:00 pm
+ Google Calendar+ iCal Export