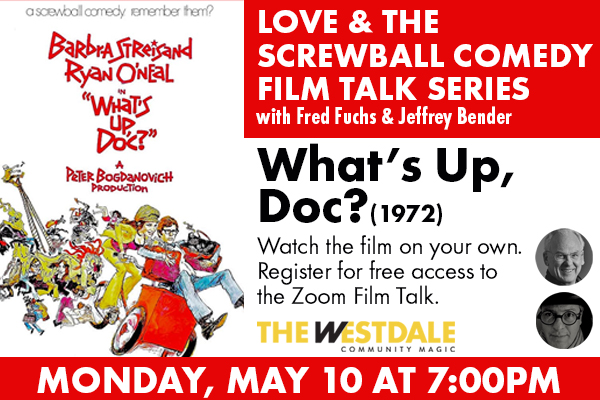 The accidental mix-up of four identical plaid overnight bags leads to a series of increasingly wild and wacky situations.

When Peter Bogdanovich got the opportunity to make a film with Barbra Streisand, who had seen and admired the writer-director’s 1971 hit The Last Picture Show, his key idea was to showcase her in a picture inspired by ’30s and ’40s screwball comedies like Bringing Up Baby (1938). The result was the 1972 hit What’s Up, Doc?, a movie beloved by audiences – but not by Streisand, even though she’s superb as ditzy-genius college dropout Judy Maxwell, who meets bumbling, mild-mannered “musical archaeologist” Howard Bannister (Ryan O’Neal) and turns his life upside-down, sideways, and back-to-front.

Register for the Zoom Film Talk May 10 at 7:00 pm
+ Google Calendar+ iCal Export