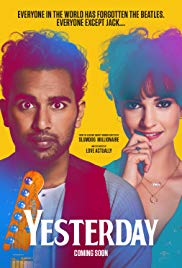 A struggling musician realizes he’s the only person on Earth who can remember The Beatles after waking up in an alternate timeline where they never existed.

On Friday, August 16th,  Four-time Hamilton Music Award Winner, Christopher Clause will perform a short set before the film. Clause’s love and passion for the Beatles seem to be what he is best known for in Hamilton. He has organized Beatles’ fundraising tribute shows since 2002 and his musical charity work has raised over $40,000 for those in need in the city.  He also marked the 50th anniversary of the release of the Beatles’ “Rubber Soul” album by inviting musicians from the city to record a tribute version of the album, The Word is Love, at Grant Avenue Studio and co-produced by Amy King.